Home » Darcie Ready To Take On The World 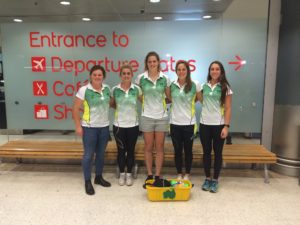 For the past 18 months Darcie Morrison has been learning the rules and skills necessary to be competitive in the sport of Rugby 7’s. Her selection in the Australian University team is testament to her dedication and willingness to learn considering her extremely short time in the sport.

The Australian team is currently in Swansea in Great Britain to contest the 7th World University Championship. The Championships are part of the sporting events of the International University Sports Federation (FISU) that are hosted every even-numbered year, alternating with the Summer and Winter Universiade.

Competitions are played in more than 50 sports. Rugby Sevens entered the programme of the FISU World University Championships in 2004 and has been increasing in popularity ever since with the 7th edition being hosted at the Swansea University International Sports Village. The first year nine countries took part, and this year 20 teams from 15 countries will be competing.

The two Australian teams flew from Brisbane last Sunday for the first leg to Singapore, continuing on to London, followed by a four hours bus trip to Swansea. Darcie met up with the NSW members in Sydney who then made their way to Brisbane. Both teams will have the opportunity to train together for two days prior to the competition.

The Australian Women’s team will play in Pool B which will see them up against Canada, China, Spain and Portugal. The Men will take on Great Britain, Namibia, Italy and the Czech Republic in Pool A. The teams will play two games each day and their place in the finals on the 9th will be dependant on their results.

Other nations competing include Argentina, France, Kenya, Japan, Malaysia and New Zealand. On departure, Darcie had mixed emotions of excitement, anxiety and nerves but was proud to be wearing the Green and Gold and having the chance to compete for her country. “I couldn’t wait to try on my
kit when it arrived and can’t wait to see the playing gear,” she said. “This is my biggest achievement in sport and I hope I can play well and do my best without making any mistakes.”

Darcie was given this opportunity through the Australian Institute of Sport Sports Draft program and identification and selection by the New South Wales Rugby 7’s Development program.