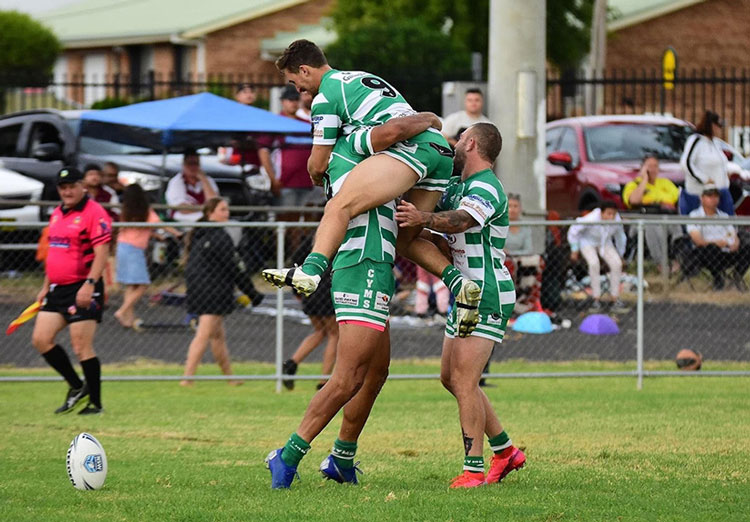 FAMILIAR SIGHT: Dubbo CYMS players celebrating another try on the weekend as Forbes Magpies went down in all four grades. (Pic courtesy of Dubbo CYMS)

Dubbo CYMS steamrolled Forbes Magpies in a 42-16 rout last weekend to send a warning to rival teams they are not here to make up the numbers in 2021.

The classic rivalry between the two clubs never really materialised as Forbes were always playing catch up despite a lively start against a slick CYMS side lead by familiar names Thurston and Ramien.

A huge second half effort saw Tongia Fox crash over before Mitch Burke also grabbed one. Nick Greenhalgh kicked four goals for Forbes who have one draw and two losses to start season 2021.

In reserves the script read much the same with Dubbo trouncing the Magies 38-4 with doubles to Craig McLean and Mark Merritt. Kristian Markwort nabbed one for Forbes.

In Under 18s it was a much more dour affair with Dubbo again prevailing 24-12 in a cracking game. Forbes will rue the two early tries that gave Dubbo a 12-0 lead at the break after both sides scored 12 points in the second half.

League Tag unfortunately also followed the same thread with our ladies going down in the match of the day 14-6 despite Forbes leading 6-4 at the orange break. Courtney Hodge grabbed the Maggies only try of the game.