You are here: Home / Articles / CWA And The Three Blue Ducks 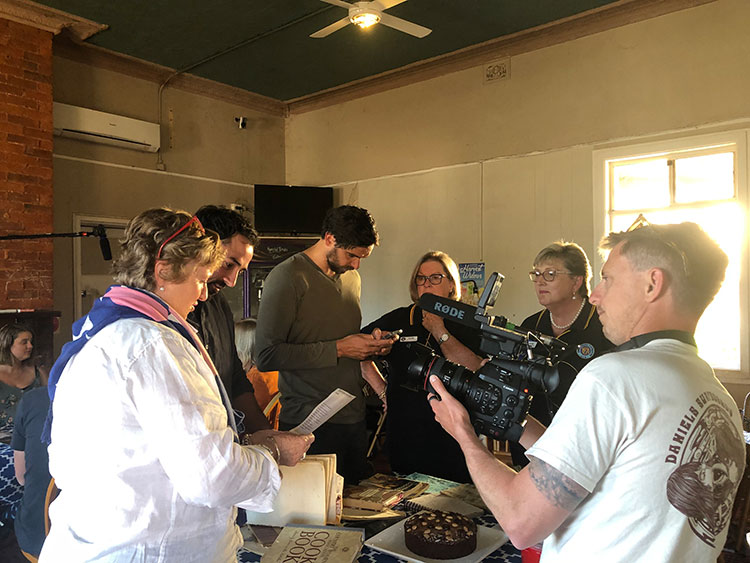 In early November 2020, Forbes CWA Evening Branch members received an unexpected invitation to be involved in the filming of a new cooking and lifestyle program.

The invitation asked for members to provide samples of family favourite lamb dishes and their well-used recipe books which contained go-to recipes. CWA branches were targeted because of their traditional reputations as being good cooks. Intrigued by this, and always looking for opportunities to be involved in community events, four Forbes members, Karen Wright, Heather Mackinnon, Robyn Miller and Sue Cunningham joined a small group of CWA members from Parkes and Forbes Day Branches at Trundle.

Andy Allen, youngest Masterchef winner and Junior Masterchef judge, Mark Labrooy, Masterchef guest judge and international chef, and Darren Robertson from Masterchef, Iron Chef and My Kitchen Rules hosted the ladies’. All three Chefs and owners of the Three Blue Ducks restaurants located in Sydney, Byron Bay and Brisbane, were looking for authentic, good old fashioned, ‘rustic’ country cooking to taste and possibly incorporate the recipes into their menus at these venues. “We want to maintain our commitment to supporting small farmers and producers,” said Darren. “It’s really about working with what’s available, minimising waste and sourcing produce that’s as organic as possible.”

There was a variety of different lamb dishes brought along by CWA members including a sweet lamb curry, a jumbuck stew, and a lamb hotpot, all cooked by Forbes members, which impressed the celebrity chefs.

Filming was very fluid with the cameras shooting most of the time while the group discussed a variety of topics, taste-tested the dishes and perused the old and much-loved cookbooks. The film crew and sound man roved around the ladies’ filming with the mic just above their heads. However, it didn’t take long for the ladies to relax and forget about the cameras and crew as it was interesting for them to look at the historic cookbooks while chatting about how country cooks cook. 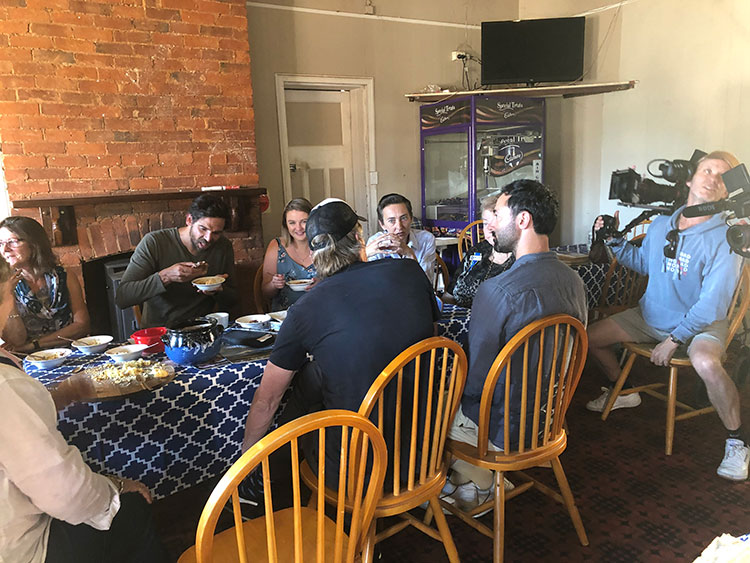 Taste testing of the lamb dishes.

Apart from taste testing, the filming for this episode included an open and frank discussion surrounding the issues important to rural, regional and remote communities, what the CWA is all about and its role in the community, and how local branches have changed and adapted to support women, families and the community in an ever-changing world.

The three chefs spent time delving into some very old and much-loved recipe books brought along by members. The focus was on the waste reduction approach that farmers have historically taken when providing food for their families. “Reducing waste and sustainability is very important to us,” commented Mark.

“We are visiting places where we source our foods that we cook and serve,” stated Andy. “We wanted to find out about the local areas and the communities from where the food originates and from the Trundle area where we source much of the lamb we serve.” Different episodes will focus on where they source their seafood, beef, and other produce.

What was intended to be ninety minutes of filming turned into several hours. “It was all good fun and something different,” stated Robyn Miller, President of Forbes CWA Evening Branch.

This episode takes the three chefs to western NSW and a Trundle family property to explore the use of lamb in their cooking. Forbes and Parkes CWA branches were involved in the filming of this episode of the 6 part series.

If you missed the first episode you can view it, as well as all the upcoming episodes on 10 Play.