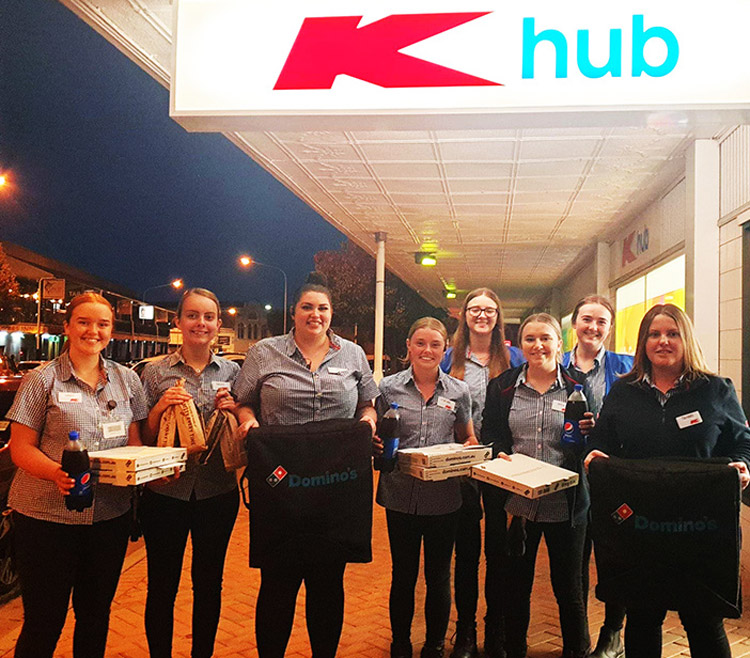 TO NEW BEGINNINGS: KHub staff enjoying a Dominos Pizza after working tirelessly over the grand opening of the Forbes store last weekend.

Last Friday KHub opened in Forbes in the old Target Country building in Rankin Street in what is a real bonus for the community.

The new Forbes store is one of 70 new KHubs being opened by the retail giant across the country with Cowra also getting their own specialty shop in September. In the interim though, neighbouring towns will have to travel to Forbes.

“Strategically we are setting ourselves up as a retail hub here in Forbes,” said Mayor Phyllis Miller.

“It is a real win for our town and great to see the space filled after Target,” she said.

Meanwhile Domino’s Pizza Forbes also got in on the launch, donating pizzas to new staff who had been working tirelessly since the grand opening on May 7.

“We wanted to support KHub and show them how much we appreciate them coming to our town and supporting business here,” said Forbes Assistant Manager Tre Griffin.

It was the sentiment echoed by many as numbers piled into the new store all week since the opening in a great boost for local retail.