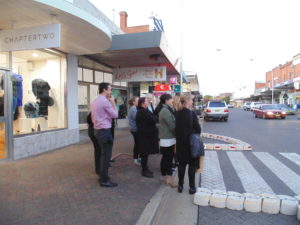 Concerned business owners, and representatives from Forbes Shire Council met at the pedestrian crossing on Rankin Street on Wednesday May 4 to discuss the amendments to the crossing. Acting General Manager, Max Kershaw, Director of Engineering, John Zannes, and Manager of Technical Services, David Timlin, met with business owners to discuss their concerns. Max Kershaw started by apologising for the lack of previous consultation and resolved to answer questions, and to address concerns. Business owners are concerned that the extension of the kerb is not safe passage for cars speeding through, and it also takes up car spaces.

Martin Cahill from Cahill Footwear voiced his concern about trucks getting around the corner, “When a truck parks in front of the extended kerb, cars can’t see around it and have to pull out into the other lane to pass.” All business owners reiterated that safety is their first concern, but some were adamant that the extension of the kerb was not the best option to optimise safety. The issue of the speed limit in the street was voiced, with the suggestion of reducing the speed limit to 40 km/ h. Some of the business owners were in support of the amendments, stating that any safety measures were desirable, and even if the kerb extension wasn’t ideal, it was better than it had been. Mr Cahill asked for a show of hands for those who do not support the kerb extension, and the majority raised their hands.

Mr Kershaw confirmed that the crossing amendments would go ahead, and reassured business owners that the rumours of Rankin Street being closed, were false. While the meeting may not have produced an outcome favourable by all, it was an important time for business owners to have a voice, and have their concerns directly addressed by the Council.
By Annelise Stephenson