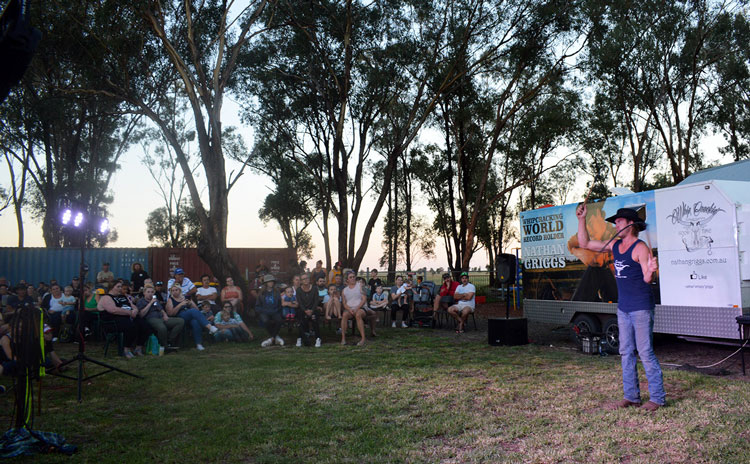 WHIP IT GOOD: Nathan ‘Whippy’ Griggs, the number 1 and fastest whip-cracker in the world putting on a show at Calarie Hall last week to a packed local crowd.

Last week whip-cracking royalty came to Calarie Hall when Nathan ‘Whippy’ Griggs came to town and put on a show as part of his tour.

Griggs is not only Australia’s number 1 whip cracking entertainer, he is a five time whip cracking Guinness world record holder! Four times for fastest records with both one and two hands, 697 cracks in a minute two whips, 359 cracks in a minute 1 whip and for the longest whip in the world cracking a whip over 100m long. When it comes to whips you will not find a more inspiring and passionate man. Nathan is a new breed of Australian whip cracker, and he’s taking the world by storm.

Located in Mataranka, Northern Territory, Nathan has invested a lot of his time into perfecting his whip cracking and whip making expertise. Now a professional entertainer and artisan whip maker, his whips are in demand from all over the world… as is his whip cracking entertainment.

The past eight years Nathan has spent touring Australia. Now traveling Australia with his partner Tess Rowley the founder of Fernie Swim. They are working together to expand what they both have to offer. Nathan and Tess have a passion for rural Australia and traveling.

Taking his show to hundreds of towns, entertaining thousands with his ever evolving whip cracking talent and distinc-tive style of Aussie humour.

“Calarie and Forbes has been one of my most packed shows,” said Griggs. “It’s great to get out here to these places.Can’t wait to come back and do it all again!”

With his growing fan base and social media stardom the name Nathan “Whippy” Griggs will be one to watch on the global circuit.

More information about touring dates can be obtained at www.nathangriggs.com.au