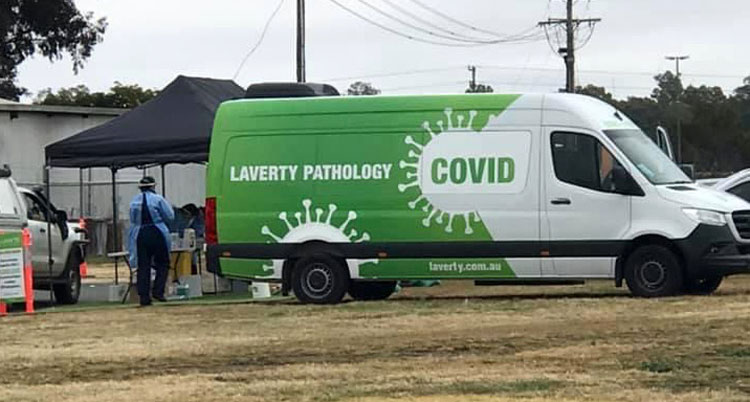 TESTING SITE: Forbes Showground has been a COVID testing site since Thursday June 10 after a COVID scare swept along the Newell Highway following the news an infectious couple left Victoria for Queensland early June and stopped in Forbes.

Late last week a COVID scare swept through Forbes and other centres along the Newell Highway and into Queensland following the news on Wednesday afternoon June 9, that two people potentially infected with COVID-19 had stopped in the town on June 1 and 2.

Other towns along the highway were also added to the list as it became apparent the Victorian couple who had travelled up to the Sunshine Coast, had stopped in more locations than had been previously believed.

Western NSW Local Health District soon had testing spots set up for people to be swabbed. Since this time last week, there have been no new locally-acquired cases of COVID-19 recorded in NSW since Forbes and other Newell Highway communities were put on alert over a week ago.

Well over 600 people have been tested for COVID-19 in Forbes with more than 3,000 people fronting for testing on Thursday across regional centres after the news had broken.

In other developments:
• NSW Health update released at 11am Monday, they announced they had recorded no new locally acquired cases of COVID-19 to 8pm Sunday June 13.
• On Saturday, samples taken from the sewerage system in Forbes at that time had not detected fragments of the virus that causes COVID-19.
• A pop-up testing centre opened on Thursday morning, and remains open at Forbes Showground at time of publication.
• A COVID-19 vaccination clinic was in town on Friday, and 230 people had their first vaccination dose.

Anyone who resides in or has visited Forbes, Coonabarabran, Dubbo or the other areas visited should monitor for the onset of even the mildest of cold-like symptoms. If symptoms appear, please seek COVID testing, and isolate until you receive a negative result.