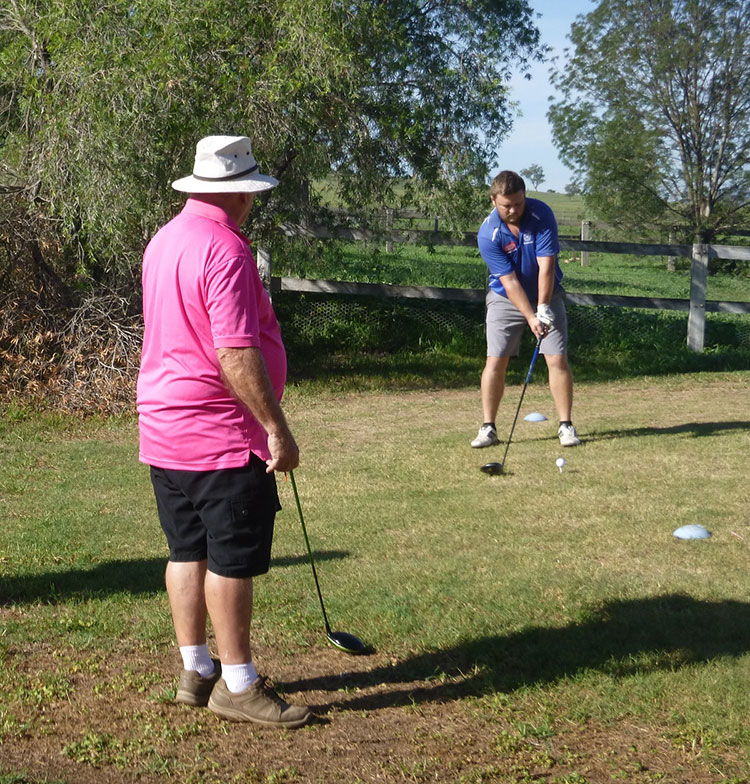 Chris Pay of Cowra tees off ahead of opponent Garry King of Wentworth in the Pennants.

The Ian Simpson Real Estate sponsored Men’s competition on Saturday was an Individual Stroke. A field of 60 players scored well with a count back needed to decide the Division 1 winner.

The Division 1 was won by Peter Barnes over Andrew Brownlow of Peak Hill after both had finished on nett 67. The Division 2 had Ross Williams, with nett 73, a clear winner ahead of Craig Barrett with a nett 74.

The Sunday Stableford Medley had a small field. Bess Shields won with 34 points. There was no runner-up or ball sweep, and nobody hit the greens so no NTP’s either.

The Club’s Pennants teams played the fifth round at Wellington on Sunday. John Betland had the biggest win of 7/6 over Aaron Wilkie from Parkes. Bob Borger battled to the 20th hole for his win.

The Summer Super 6’s comp is now into its final week, with very little separating the top seven teams in each Pool, from which five teams from each Pool will advance to the Finals. The Grand Final will be held on Sunday, 5th April, with the Presentation to follow that evening, upstairs in the Golf Club.

Mark your calendars for the Sanderson Memorial Day on 28th March, and a 3-Person Ambrose on 19th April. Contact the Pro Shop for details.

Saturday, 7th March is the Monthly Medal, sponsored by Michael Robinson & Co. Sunday, 8th March has the Stableford Medley with the Pennants for Division 1 and 3, continuing at Wentworth.

Keep up to date on the facebook page: www.facebook.com/forbesgolfcourse/