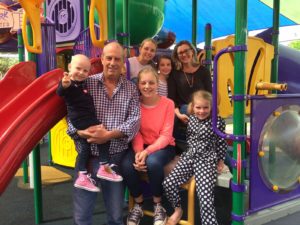 Last month the Garland family spent a day at Forbes McDonalds for the national McHappy Day – the biggest annual fundraiser for the Ronald McDonald House. It was a rare moment of togetherness for the family of seven, who had been wrenched apart six months earlier when their youngest daughter Ava was diagnosed with leukemia.

At 1:15pm on 31st May, Kathy had taken the three-year-old to the doctor for a checkup. Ava hadn’t been feeling well, and the doctor sent her to Forbes hospital for blood tests, but when the results came back Ava was sent straight to Westmead. By 1am Ava had been booked into the Camperdown ward and started on intensive chemotherapy immediately. It was an unexpected crisis to suddenly face, and the fact that Ava’s four older sisters were at school at the time was an added complication. Fortunately, a close friend looked after the girls overnight, despite having four kids of her own.

Meanwhile, Andrew, Kath and Ava were in Sydney with nothing but the clothes they were wearing. Redkite provided them with a tote bag full of useful products, such as toiletries, thermal cups, a thermometer, and a diary. Ava joined the Redkite Bead Program, and is given a bead for every procedure or milestone she has faced.

The family has received support from cancer charities such as Little Wings, Meals from the Heart, and the Ronald McDonald House. “They’re amazing,” Kath said, “but you never think you’ll need them.” It’s been a tough six months for the family, who are now living in four different locations. Kath and Ava are staying at the Ronald McDonald house at Westmead Hospital. Scarlett, 13, is boarded at Red Bend Catholic College. Olivia, 11, Polly, 8, and Willa, 6, have moved to Orange to live with Kath’s sister Annette and her husband Anthony.

Andrew returned home to manage the farm at Wirrinya, but after the flooding in September, he ended up in hospital with Ross River Fever. Kath said the community has been phenomenal. From providing home-cooked meals to get Andrew through harvest, to holding fundraisers, or delivering hampers of necessities, Forbes has rallied around the family. “Ava is going through a hard stage, she is currently on steroids and is scheduled to have 15 days straight chemo around Christmas. After this intensive phase of chemo, Ava will be on maintenance chemo for the next 18 months.” Kathy said. “So many people have sent me messages, letters and gifts, which just makes me feel strong and loved and able to face the hard days being away from home and the rest of the family.”

This swell of support looks set to build in 2017. Family friend Adrian Matthews is organising ‘Opera for Ava’ to be held at Red Bend College in April 2017. The concert will feature Dominica Matthews, a principal soloist for Opera Australia. Even Scarlett is doing her bit, and has so far raised more than $5,000 for the 2017 World’s Greatest Shave after pledging to shave her luscious locks for her sister. To sponsor Scarlet Garland visit https://worldsgreatestshave.com