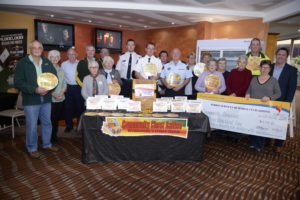 The Forbes Community Chest grant program will continue indefinitely, after the six month trial period ended as a resounding success. The program, which is being facilitated by the Forbes Services Memorial Club, has seen a Wednesday night raffle held each week since November last year, with a month’s worth of raffle funds going towards a selected community organisation.

Organisations are selected by the Community Chest in conjunction with the Services Club, and with a total of $15,571.95, Club General Manager David Fitzgerald said the program had shown its worth. “It’s a great program because all of the funds raised come straight from the community, and go back into the community. The club just facilitates it and donates the raffle prizes,” Mr Fitzgerald said.

“From a fundraising perspective, it’s been exceptional, and with the raffles, we’ve seen tremendous support from local people that come to the club.” “Other businesses from around town have also provided vouchers as prizes for the raffles, so it really has been a community effort.” Mr Fitzgerald added it was often difficult to select the right organisations in town to fundraise for, and encouraged local charities to let themselves be known.

“It’s intended for their use, and it’s intended for them to be able to raise funds, so if there’s charities out there looking for a bit of a financial kick, give us a ring or come in and see us, and ask for assistance.” The winners of the last six months of fundraising were CanAssist Forbes in November, Forbes Legacy in December, the Rural Fire Service in January, the State Emergency Service in February, Jemalong Residential Village Carers Group in March, the FBA in April, and the Mater Nursing Home Auxiliary in May.

The Red Bend College Junior Rugby League Club will be the beneficiary of funds for fundraising this month. JRV Carers Group President Helen Hurley said the funding her organisation has received would be crucial to continuing its services at Jemalong Village. “Our role is to provide services to residents at the Jemalong Village, for example taking them on bus trips, purchasing them items needed for general entertainment, and anything else to make their lives more pleasant,” she said. “We’ve just ordered four roller chairs for the residents, and they cost us about $500 each, so our funds will be able to cover that.

A bus trip will cost us about $1000 as well, so we’ll now have funds for that too.” Mrs Hurley said the funds will also save her organisation from needing to host extra fundraising events this year.