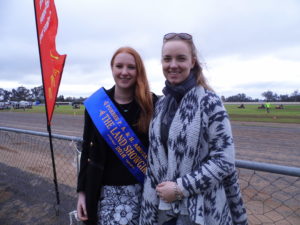 While Forbes was almost turned into an island last weekend by floodwaters, the town’s community spirit was not dampened for the 141st show. The first female president of the Forbes P.A. & H Association, Jan Facey, said although
numbers were down by about half a lot of people got out in the rain and wet. “We are quite happy and grateful for the support, and would like to thank everyone who joined in the fun.”

One of the highlights this year was the new entertaining Show Mow event, which became extra spectacular with so much mud around. According to Jan, Show Mow consists of a club of people who travel around the country to race at shows on their lawn mowers. Although entries in the different categories were unfortunately down, because of
people flooded in, entries were of a high quality. Only the cooking category budged the trend with a lot more entries.

One of the show’s major events, the ring events, had to be postponed to the Spring Horse Show on the weekend of 22nd and 23rd October, when the dog high jump and yard dog display will also take place. The dairy cattle judging could also not take place and will now be on Monday. Jan said she was happy not to be stuck in the show office this year. “It was a real treat to get out and talk to people. The feedback has been very positive.”