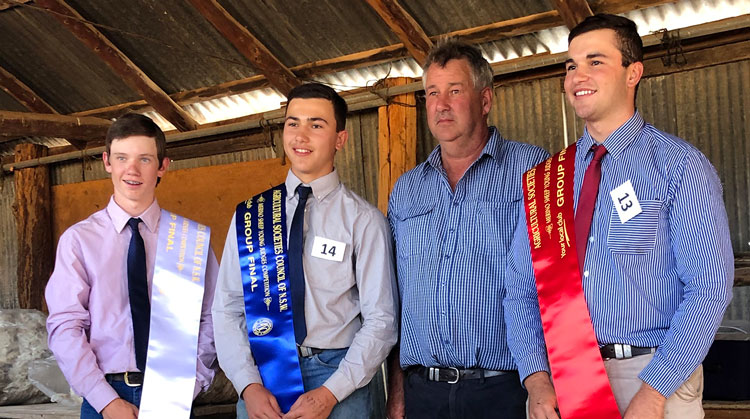 FINALIST: Campbell Rubie, who credits brother Mitchell and father Glen for his success, is competing in his first year as a junior judge having already qualified and won the Merino sheep section at the Royal Easter Show back in April.

Clarissa Peasley, 18, and Campbell Rubie, 16, are the New South Wales state finalists at the 2021 Agricultural Shows Australia National Young Judges finals to be held at the Royal Queensland Show in August.

Clarissa will be smack bang in the middle of her HSC during the competition, leaving her English exam to fly to Brisbane and return in time for her Chemistry exam.

Hailing from Forbes in NSW, Clarissa has always had a passion for agriculture. “I’m off a mixed enterprise farm which is where I found my natural passion for agriculture and livestock. I am currently in year 12 doing my final months before I graduate,” Clarissa said. “I have a strong passion for the sheep industry and ten years from now I hope to have made an impact in the agricultural industry,” she said.

“I started doing shows with my show team in high school at Red Bend Catholic College, my previous high school, then in year 10 I moved schools to St Pauls College in Walla Walla for their amazing agriculture program and started on their sheep show team,” Clarissa said. “Emma Finemore, my previous show team teacher, has also been incredibly influential”.

When she went to her first Sydney Royal in 2019, she became the youngest to place in the competition. “I was awarded fifth and I only just got into the age bracket because I was turning 15 in the next month. I was still 14 when I competed,” she said.

“I hope my involvement in shows and competing helps me to establish a career once I graduate this year”.

For Campbell Rubie meanwhile, who is in Year 11 at Red Bend, to be a finalist was equally as humbling. “My dad and brother have been a great influence on my judging and I am very grateful”.