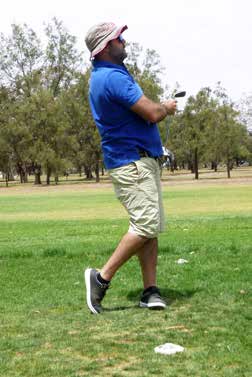 Adam Currey watching his tee shot at the 9th.

Golfers were busy with a Rotary Charity Golf Day on Sunday as well as their Saturday competition.

With 58 players participating on Saturday, the competition was going to be good. Divi- sion 1 was won by Niel Duncan, with a +4 score. Runner-up on +3 was Paul Pymont, who warded off Greg Webb also on +3. In Division 2, Adam Currey scored +2. Gra- ham Newport was runner-up on countback. The ball sweep went ‘Square’.

The NTP’s went to: 9th–R Smith; 18th–M Spice. Visiting player was Adrian Acheson, back in Forbes for the weekend.

The NTP’s went to: 9th – A Summerhays; 18th – P Barnes. The Lucky Card draw went to D and B Slack-Smith/J Nottingham.

In the Wallace Cup, Todd Callaghan won the semi-final against Ian Bown, finishing 2-up. Todd plays Steve Grallelis in the Final.The first round of the Summer Sixes comp was played last week, with 28 teams participating.

We wish the Lachlan Valley District team including three Forbes players good luck in the Country Championships, held at Goulburn this weekend. Don’t forget the Forbes Nissan Classic on the weekend of 9/10 November.