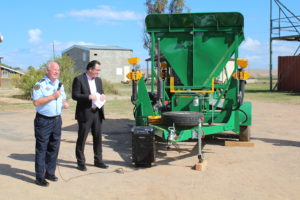 The Forbes State Emergency Service (SES) will be able to double its efforts in future floods thanks to the generosity of service clubs in the Central West.

“It is a big help for the whole Shire,” said Robert. “The new ma- chines will supplement our existing one, which means we would be able to get double the amount of sand bags in case of a flood event. We would also be able to have the machines at different locations, such as Bedgerabong to get sand bags quicker to outlying town- ships.” Robert said more than 20,000 sand bags were filled last year during the floods.