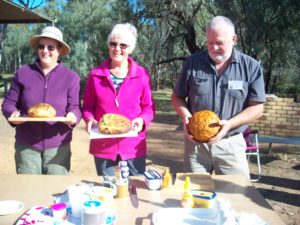 The annual Lachlan Valley Caravan Bush Rally was held at the Kiacatoo Hall grounds last week. The popular rally saw 29 caravans arrive to enjoy a week of camping in a bush setting beside the Lachlan river. Campers were serenaded by resident muso’s Rod, Rob, Jim and Colleen.

Each morning the campers feasted on dampers with the camp cooks seeing who could cook the best before a plate of jaffles and toast for breakfast and pots of soup on hot coals for dinner. The club would like to thank all the woodcutters for the firewood they gathered and Judith Buttriss for keeping the coals alight in the early hours.

For those who haven’t seen it, The Church in the Paddock was another highlight with its lovely domed ceiling and mosaics. As the weather turned wet the campers retreated to a hall for their Biggest Morning Tea, with tasty food coming from the caravans, decorations and raffles. A total of $617 was raised, with all money going to Cancer Research. The mood of the rally turned silly when members dressed up for the skit pantomime, Cinderfello. Helen Pitt and Ruth Armstrong gathered all costumes for a hilarious few hours!

President, Peter Bright, then presided over the club meeting, welcoming all for attending and reports were read and business discussed. It was noted that Lachlan Valley are one of the four biggest clubs in NSW.

Lots of games of rummy and scrabble were enjoyed over the week while fishing and games of tennis were popular for those who were fit along with bush walks. At the end of the week winter seemed to quickly set in so all campers were happy to head back to their home comforts!