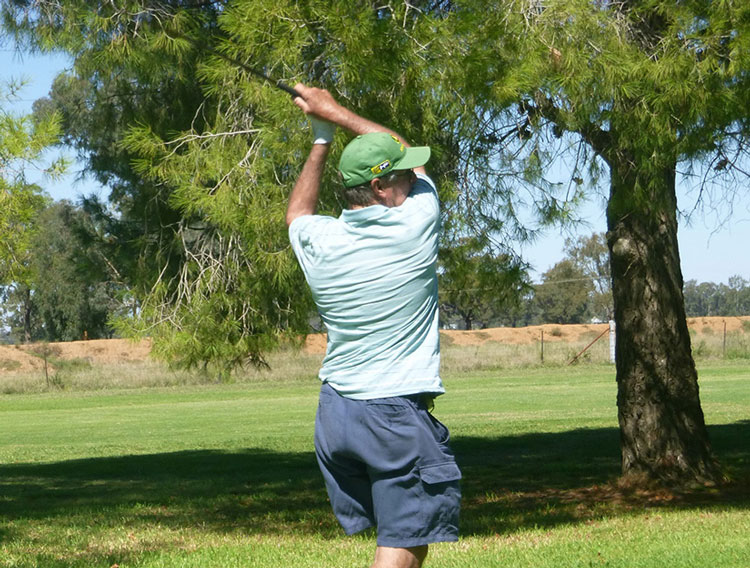 FOLLOW THROUGH: Greg Webb follows through on his drive watching it intently as it flies down the fairway.

There was a wealthy of golf played over the Easter weekend, with Saturday’s comp an Individual Par, sponsored by the Forbes Tuesday Golfers, and contested by 76 players. The Division 1 was close, with Phil Duke winning with a score of +2 ahead of Brad Ashton on +1. Division 2 results saw Isaac Vale (+11) the winner ahead of Lachlan Higgins (Royal Sydney) on +7.

The Sunday Stableford Medley had a small field. Ethel Coombs won the day with 32 points, on count back ahead of Greg Blackstock (West Wyalong). There were no NTP’s.

Monday’s Stableford Medley had quite a few more players, including some visitors. The winner was Brad Ashton (39 pts) from Max Haley (38 pts). The ball sweep went to 32 pts on count back. There were no NTP’s.

The Wallace Cup Match Play Championship Draw will be made soon, with games to commence in late April. Get your name in now if you want to play.

A “Three Opens Champion”, will be played over the Forbes, West Wyalong and Condobolin Opens, with a handicap champion determined in each of three grades. Details are being circulated.

Saturday 10 April is the Monthly Medal, sponsored by ‘the Roadies’ group. Sunday has a Stableford Medley. Saturday, 17 April is the annual Kristie Carpenter Perpetual Trophy.