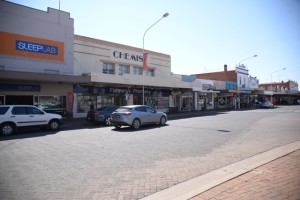 The Forbes Business Chamber is currently working with the Forbes Shire Council on a 15-year plan to improve the town’s CBD. Chamber President Stuart Thomas said areas such as the CBD’s streetscape, shared zones, shade improvements as well as other ideas to improve the shopping experience in Forbes would be considered.

Mr Thomas said the overall goal was to make Forbes a “vibrant shopping space”. “We’ve got a goal with the view that we’ll end up with a vibrant shopping district, but also more than that, an area where the community will enjoy having a meal and a chat, and do their shopping,” he said.

“It would have a combined effect of social benefits for the community, but also
economic benefits, and the retailers would benefit.” “Retailers are effected by things like online shopping now, so they need to create a point of difference so more people will walk into the store. It’ll be about the shopping experience.”
Mr Thomas said the process would be long, but one that would see input by not just the Chamber and Council, but also businesses themselves and the community.

He said a revamp of the CBD and changes to the streets were not out of the question, and this was something Council had considered in the past, but remodeling the town would take a lengthy process of consultations.

“The concept is going to involve business input but also community input. You need something that people want rather than something that is forced into place,” he said. Mr Thomas added there were also benefits from businesses investing within themselves. “Tradesmen benefit from the work, and that brings money into the local economy, and it creates a new feel and freshens things up,” he said.