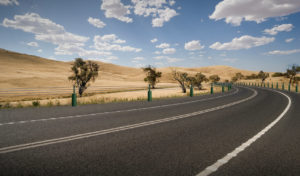 The most dangerous hotspots on NSW roads will be upgraded as part of the NSW Government’s Safer Roads Program, which will help drive the number of deaths and serious injuries on our roads towards zero.

The Safer Roads Program will:
• Include re-engineering dangerous curves, installing rumble strips to alert tired drivers, widening shoulders and
centre lines, and installing flexible wire rope barriers to help prevent run-off-road and head on crashes; and
• Uses proven engineering treatments to reduce the number and severity of crashes on the state’s roads.

The projects are estimated to save the equivalent of 425 deaths and serious injuries over the life of the program.

Rick said that 64% of the investment will be directed to regional NSW, delivering 125 projects.

“Last year, 272 people killed on NSW roads were in the country, so this will go a long way to reduce the number of fatalities on regional roads”.

“The NSW Government has invested over $282 million in road safety in the current financial year, and this $70.9 million from our Safer Roads Program will deliver more important safety upgrades in 2018- 19 for many of our most dangerous roads,” said Rick.

The Safer Roads Program was established in 2014 and to date $193.6 million has been invested and 490 road safety upgrades delivered.