You are here: Home / Recipe of the Week / Bird Boxes Help Bring Life Back After Bushfires 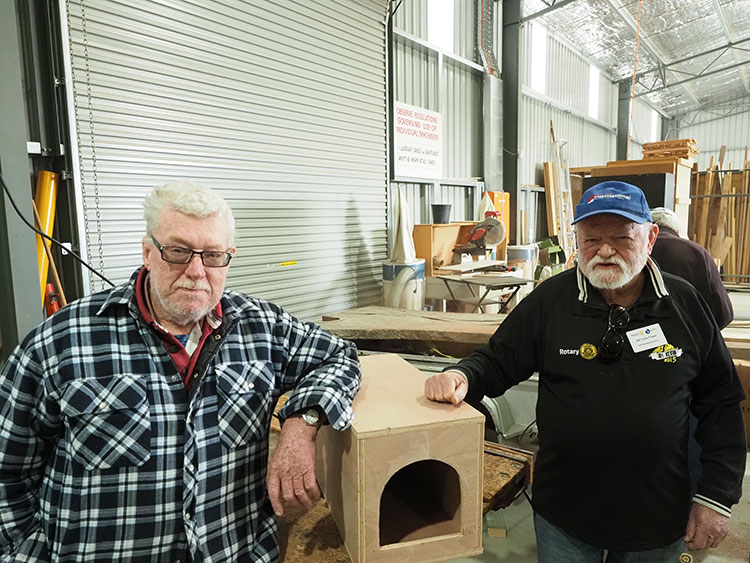 BIRDS OF A FEATHER… Ben Lan , Cliff Cowal and Ron Fewings finishing up a bird box for the Sacred Kingfisher at the Parkes Men’s Shed.

Spring is a time for new beginnings and thanks to the generosity of some locals, three species of birds will hopefully be able to produce some offspring on the fire ravaged south coast.

The unprecedented bushfires last summer destroyed the habitat of bird species who normally breed in hollow tree branches, like the Sacred Kingfisher, Crimson Rosella and Kookaburra.

Members of the Parkes Rotary Club, in conjunction with the Parkes and Forbes Men’s Sheds, completed 75 bird boxes last week that will be placed on trees in time for the spring breeding season.

Ken Engsmyr from Parkes Rotary, who also serves on the Rotary Bushfire Recovery Committee, said when he heard Rotary clubs on the South Coast were making bird boxes he thought it was the perfect opportunity to repay a kind gesture. The Sapphire Coast Rotary Clubs visited Trundle during the drought and did some work in the town to support the community.

Ken involved the two Men’s Shed groups saying, “ It gives us something to do jointly as we are all about returning something to our communities”. The Rotary Bushfire Recovery Committee had received donations from Rotary clubs overseas and funds were made available to purchase the supplies.

The Forbes Men’s Shed completed 24 Kookaburra boxes which took roughly two weeks. While Forbes’ Men’s Sheds Brian Wilkie said that the boxes were straight forward enough to build, it did take longer than usual because the men are still in the process of moving to their new shed.

Norm Haley, Forbes Men’s Shed President, said: “We were pleased to take part in it, for the places affected by the bushfires it is good to get in there and give back to the community.”

The men completed 24 boxes which were sent to Parkes on Monday before heading off to the South Coast. “I like to think the Men’s Shed can be of some assistance to the community, we endeavour to be better and I really enjoyed it, got some satisfaction out of it myself,” Brian said.