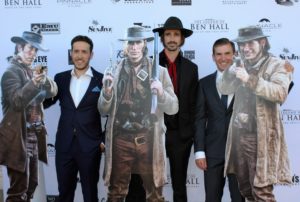 The infamous bushranger Ben Hall held Forbes captive last Saturday night as he rode into town in the independently produced feature film The Legend of Ben Hall. The notorious character was larger than life as his story was projected onto a huge inflatable screen at the Forbes Showground for the audience of 900 people who attended the world premiere.

Lead actor Jack Martin bore an uncanny resemblance to the outlaw, and his brooding portrayal won many fans, and quite a few hearts. “I didn’t have the pleasure of meeting him,” he joked. “But I did a lot of research and felt a great affinity with him,” he said. Jamie Coffa plays John Gilbert, Ben’s partner-in-crime. Jamie said the cast had to do a horse riding crash-course for the film. “It was the most challenging part of filming,” he said. “Doing dialogue, on a horse, while shooting a gun; they don’t teach you how to do that at drama school.”

The film is the brainchild of writer/director/ producer Matthew Holmes, and has been his enduring passion for the best part of a decade. Matthew was slowly crowd-funding the finance, when Forbes Shire Council got involved. With their faith in the project, momentum quickly picked up, and the team was able to embark on production. “The scope of the project was epic,” Matthew said. “We were constantly facing a battle of the budget.”

The film was shot in locations across regional NSW and Victoria and the production took a grueling two years to complete. The filmmakers were delighted to bring the film back to the heart of Ben Hall country for its premiere screening. “We are so grateful for the support from Forbes Shire Council, and it was great to be able to bring the film back to where it all started,” Matthew said.