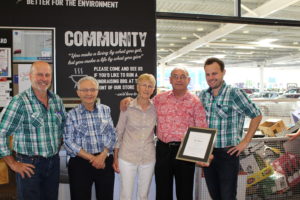 Ron Turner has been greeting customers for more than 36 years at Bernardi’s and last Saturday hundreds of customers came to say goodbye to him. CEO of Bernardi’s Supermarkets, Joe Bernardi said at the official farewell: “Ron started at Bernardi’s the year I was born. He was one of the original 20 staff members who came to work for Bernardi’s and outlasted them all. He has seen hundreds of young team members come and go and was always willing to offer his advice and support to them. He is such a valued part of the Bernardi’s family and will be sorely missed by not only us, but also the Forbes community, who have come to know and love Ron.”

This was echoed on the company’s Facebook page with loads of comments made by members of the public saying the
store won’t be the same without him. “Sad to see you go, I can remember you from when I was a little girl,” said one. Ron said the best part of his job was meeting people and watching kids grow up to become adults. “I will miss talking to everyone the most.”

Ron said he did not have any plans for the future, but looked forward to spending time with his wife Christine and visiting his grandchildren in Queanbeyan.