Local selling agents and brothers Scott and Murray Reid from VC Reid and Son were very pleased with the result of the pig sale held at Bedgerabong last month.

There were eight vendors with 91 pigs sold for an average of $929. Buyers came from Sydney, Casino, Kempsey and the lo- cal area of Forbes.

Murray said there was a total clearance at what were better than expected prices, “as recent prices had been somewhat lower”. The top priced boar, bred by Chris and James Dockrill from Casino, was purchased by Paul and Emma Baxter from Riverdale, Forbes. The boar was sold for $2,600. They said they were keen to gain some new blood for their breeding drift. 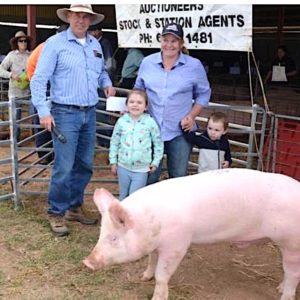