You are here: Home / Articles / Bedgerabong Cup One Of The Best Yet! 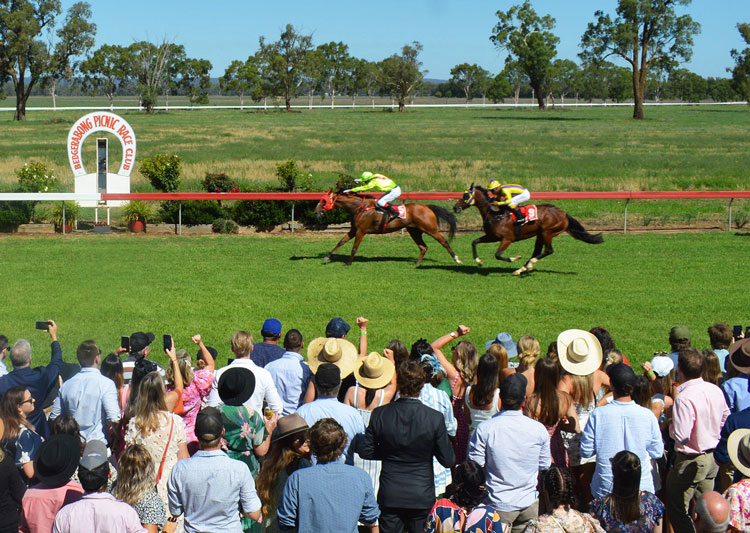 The Western Tree Care Bedgerabong Picnic Race Club (BPRC) Cup was held last weekend with nearly 1900 turning out for one of the first post-COVID events in 2021 in the Central West.

A great track, superb weather and a plethora of racing made the 102nd running of the race day one of the best yet.

“Over one hundred years of racing doesn’t just happen,” said Nathan Clarke, President of the BPRC.

“It’s a result of continuous hours of committee and community banding together to ensure that this fantastic race day continues for years to come.

“We owe such a great amount of respect to past committees and volunteers that have kept this amazing event going.”

This year’s event had six races and followed strict COVID regulations with the standout stories being Maddison Wright’s three wins and debutant jockey William Stanley grabbing his first two winners including Song One in the main race.

Other winners on the day included Dot the Eye, On A Promise, My Shiromi, Drummed Out and favourite Nepenthes in Race 6.

Debutant jockey William Stanley rode Bathurst trained ‘Dot the Eye’ to victory in an ideal start to his racing career in Race 1 and the delight of the 1,850 strong crowd. The 67kg Eyeful/ Minnalin product was too good for equal pre-race favourites the Bryan Dixon trained Arealist and Chelsbeach taking the win by 0.3 lengths.

Ironically, Stanley would team up with Dixon in Race 5 – the Bedgerabong Picnic Race Club Cup with the third favourite ‘Song One’. It was the eight year old bay gelding’s tenth win in 75 starts and Stanley’s second and biggest. Pre-race fancies Zoutenant and Lucienne never really featured finishing mid to late in the run home.

The soft track set up well for ‘Song One’ who claimed the gong by nearly a length from Regina Margherita with Sensacova over five lengths back in third.

No doubt though the day belonged to Stanley with one of the most impressive first up displays in rural sport.

“Our committee is a wonderful bunch of volunteers who never cease to amaze me when it comes to this time of year,” Mr Clarke said.