Home » Back To Back For Shead Nico 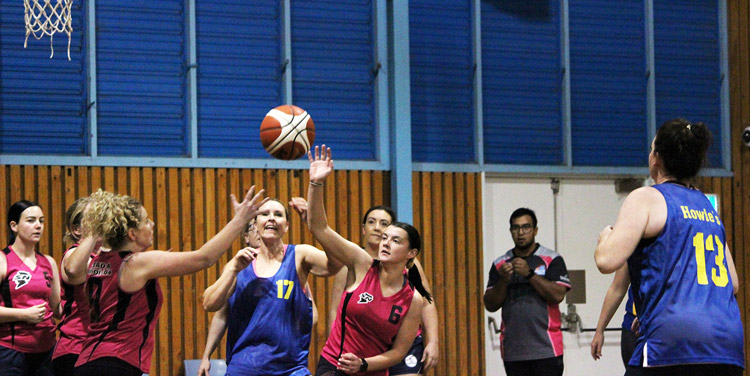 ANYONE’S BALL: Players from Shead Nico and Howies battle it out for the loose ball in last week’s women’s basketball grand final.

It was the two dream grand finals everyone wanted and that’s exactly what they got when Shead Nicholson took on Howies in the Women’s and Misfits looked to defend their title against Flint Tropics.

Howies started well, as they usually do, with Shorty Howard leading all scorers at the half with eight points as Howies dashed to a 16-4 lead with halftime approaching.

Despite having no subs Howies hustled and shot well, making life hard for Shead Nico.

The second half was always going to be tough for Howies with no reserves and soon the premiers got to work as the lead soon became double digits with time expiring.

As Michelle Bentick and Maggie Townsend led the fightback for the champions scoring all 11 points for their side to begin the second half. Bentick would go on and finish with 18 in the 45-29 win while Maggie Townsend was named MVP of the Grand Final, with 12 points of her own and some great work in defence forcing a number of turnovers.

Howies meanwhile were without defensive player of the year and regular season MVP Monique Pointon, and women’s team of the year player Kristy Butler which proved pivotal.

For the premiers Shead Nico who have secured back to back season premierships, it certainly was a team effort with Michelle Bentick, Amy, April and Maggie Townsend especially strong and supported well by Candice Morrison, Nicole Westwood and Courtney Hodge.

In the Men’s, Flint Tropics finished undefeated after a 43-15 win over defending champs Misfits. Justin Hoy led all scorers in the game with 18 points, whilst Jono Morell contributed 16 himself and was named MVP of the grand final.