You are here: Home / Articles / Australia Day Picnic And Parade A Success 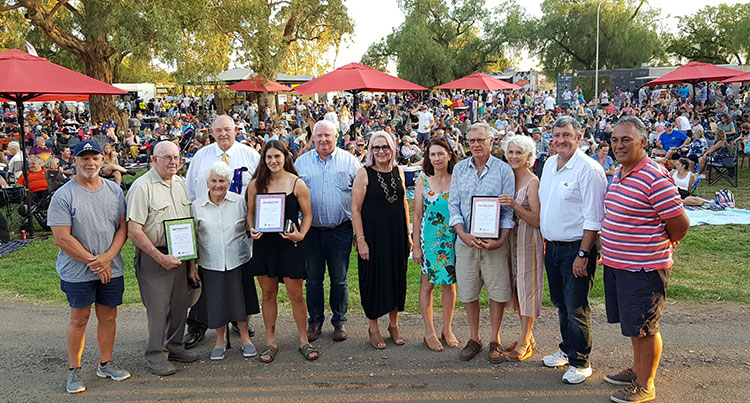 Last Sunday Forbes came to life in celebration of Australia Day. Families and friends, residents and visitors, young and old gathered in Lions Park for an evening of socialising, good food, great music, activities on the lake and recognising the contributions and achievements of the Forbes Citizens of the Year. Record numbers attended the event, with an estimated 700 attendees in the park.

Marshalling on the corner of Cross and Lachlan Street and travelling down through the town, the parade was a unique and diverse mix of various community floats, groups and individual participants. The Forbes Town and District Band led the colourful, and community-oriented parade, concluding in Lions Park where spectators lined the street to welcome the parade participants.

Lions Park was a sea of picnic rugs and eskies, with picnic attendees delighting in the live entertainment and activities on the lake. People were given the opportunity to try out paddling on the dragon boat, thanks to the Forbes Dragon Boat Club while children enjoyed the paddleboats on the lake.

Chief Inspector Bob Fitzgerald was welcomed as the Forbes Australia Day Ambassador. Bob was named the 2019 Volunteer of the Year. The father of seven is described as a real man of the people having also used his time to support victims of family violence, drug addiction and homelessness and Forbes was honoured to host him on the day.

The Forbes Citizen of the Year included a new category this year for senior residents who have made a positive contribution to their community and the winners, husband and wife, Allan and Pamela Toole couldn’t have been more deserving of recognition for decades of volunteer work throughout the community.

Lilyanne Mason-Spice received the Junior Citizen of the Year award for her international sporting success. Lilyanne was praised for her dedication to the sport and for her contribution to women’s Rugby League in Forbes.

Kim and Wendy Muffet humbly accepted the Citizen of the Year award for their tireless work in the community in arts, sporting groups and events like Grazing Down the Lachlan which has put Forbes on the tourism map.

The evening was concluded with a spectacular firework display which delighted all. Click here for photos of the Citizen of the Year winners.