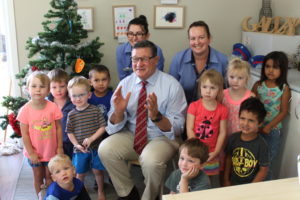 Preschool children in Parkes and Forbes will have an exciting opportunity to learn another language this year using play-based mobile tablet apps. “I’m delighted to announce that the Forbes Learning Ladder, Parkes Bluebird Early Education Centre and Victoria Street Children’s Centre in Parkes have been successful in obtaining a place in the Coalition Government’s Early Learning Languages Australia programme,” Federal Member for Calare, the Hon John Cobb said today.

“This means our local children will have the opportunity to experience Chinese, Japanese, Indonesian, French or Arabic languages through apps which are being delivered in selected preschools across Australia. The Parkes Bluebird Early Education Centre was one of the 41 preschools who participated in the trial last year.

Centre Manger Rachael Westcott said the children responded to the new way of learning wonderfully. “The children not only practice their words at the centre during their time on the iPads but also continue using the greetings and familiar words at home with their families”. Mr Cobb said, “The ELLA programme is a great opportunity for our preschoolers to make an early start on becoming familiar with another language and I commend the three providers in Calare for committing to the programme and giving our children this opportunity.

The Coalition Government has invested $9.8 million in the languages app to help to revive language study in Australia’s early education centres, schools and universities. Following the success of the ELLA programme and Polyglots apps, the Coalition Government has committed $6 million through the National Science and Innovation Agenda to the development of a similar app focused on inspiring students’ interest in science, technology, engineering and
mathematics.

For more information about the ELLA programme visit: www.education.gov.au/earlylearning-languages-australia