Home » Always Something New For Cheryl 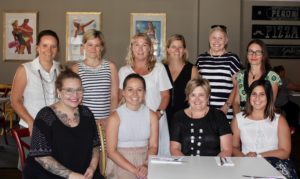 The courageous and committed woman solely responsible for the establishment of four new community newspapers in the Central West, has decided to write the ending to one chapter of her illustrious career.

Cheryl Newsom, Publisher of The Phoe- nix Group of Newspapers, handed over the reins to her daughter Sarah Maynard this week to retire.

Cheryl marched in where others feared to tread during a time of downsizing in the newspaper industry worldwide, and within three years had four successful newspapers up and running.

She arrived in Canowindra five years ago after a successful media career in the Big Smoke to be closer to her family. She continued with her media consultancy busi- ness Inxcess for a few years, and then decided she wanted to do something locally. When The Canowindra Phoenix came up for sale in 2013 she jumped at the opportunity, and had her very own newspaper for the first time.

The Canowindra Phoenix was transformed from a small four-page paper to a 12-page weekly publication with the motto: Live Local, Love Local, Shop Local.

The Phoenix recipe proved successful and there was no stopping Chez, as she is also known. The Forbes Phoenix was launched on 3rd July 2015, and in March last year two more newspapers saw the light: The Parkes Phoenix and The Hilltops Phoenix.

She was a woman on a mission, and would often say: “Watch out Fairfax we are hot on your tail!”

Chez is a sales guru at heart and selling is her real passion. She was instrumental in launching the Canowindra Tourism Booklet, the Blayney Tourism Booklet, as well as calendar and rainfall charts for all four newspapers.

She already has some new jobs in the pipeline for retirement, but for now The Phoenix team wishes her safe travelling and time to just chill out.