Home » All Fired Up! 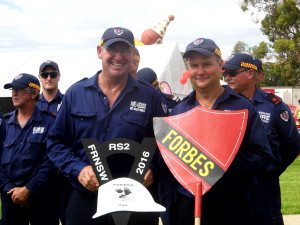 Soaring temperatures over the weekend did not deter our volunteer firefighters from competing to the best of their ability in the 2016 Region South 2 Fire & Rescue NSW Firefighter Championships held in Forbes on the weekend.

Twenty five teams from around the state competed in eleven events during the two day competition with Kelso the eventual winners followed by Nowra and then Bega in third position. The Forbes Brigade entered two teams in the event and finished 8th and 11th which was a fantastic effort.

Each event simulates a real life emergency situation and fire fighters race against the clock to secure the fastest time. Penalties are incurred for infringements of the rules or protocols with all teams taking the competition very seriously. Visiting officials were very impressed with the venue
provided by Forbes and team entries for the weekend were one of the highest for this level of competition.

Forbes Mayor, Phyllis Miller welcomed everyone to Forbes and expressed gratitude for the incredible job our fire fighters do everyday. She reflected on her own personal experience and could not fault the local Forbes Brigade when her home was burnt several years before. FRNSW Chaplin Lyndsay Smith gave the blessing and the Fire & Rescue NSW Commissioner – Greg Mullins AFSM declared the championship officially open.

President FRNSW FCA – Captain Greg Fredericks remembered the last time the event was hosted in Forbes and stated how the Forbes Brigade responded to a house fire during the event.

The Saturday evening function held at the Sport & Recreation Club was a huge
success with approximately 200 attending and organisers of the weekend were
extremely pleased with the weekend overall. Future 2016 Championships are to be held at Grafton in May, Tamworth in August and the State Championships at Wyong in October. The Forbes team are hoping to attend Tamworth and Wyong and improve their position on the ladder.