Home » Ainslie Is Netball Club Person Of The Year 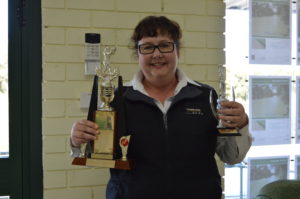 Ainslie Toole is the Club Person of the Year of the Forbes Netball Association (FNA). Ainslie had made a huge impact in not only promoting netball in the community, but also lobbying politicians to get new netball courts in Forbes.

She started last year by securing a grant of $25,000 to re-build one court, and this year managed to commit politicians to $600,000 for the rebuilding of the Forbes netball complex. Senator Fiona Nash and Michael McCormack, Member for Riverina, promised earlier this year that if the Government were re-elected 12 new courts, eight with lights, would be built in Forbes.

Ainslie started lobbying when word got around that the FNA All Age carnival had to be cancelled as there were not enough playable courts for the large number of teams wanting to attend.

“It was very humbling and lovely to be recognised for the work I’ve done,” said Ainslie after receiving the award. “Our whole committee worked very hard to make positive changes. Our number one goal was to fix the courts.”

Ainslie joined the Forbes Netball Association Committee four years ago as registrar. During that time, she put the FNA on the map for online registrations by becoming the first netball association in the West/Central West to do so.

Ainslie stepped up to become President of the FNA two years ago, and whenever there was a politician in Forbes, she made sure to show them the unplayable state of the courts.

Ainslie had one message for parents: “The more involved you are in your childrens’ sport, the more fun you have.” She said it was a wonderful way to bond with kids. “I would really like to encourage parents to get involved to spend quality time with your kids.”