You are here: Home / Articles / A Spectacular Australia Day Celebrated In Forbes 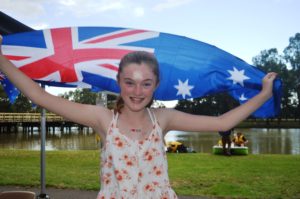 This year saw Forbes celebrate Australia Day like no other town quite can. The day held nearly all elements of weather. From severe heat and gusty winds, to thunder and lightning before a welcome momentarily rainfall just enough to cool things down a little, allowing community members to really enjoy the rest of the celebrations.

The day began with the Rotary Community Breakfast at Apex Park. Followed by the Diggers Swim at the Forbes Olympic Pool.

Celebrations continued during the evening with activities and fun at Lions Park, the beautiful Lakeside Forbes also being utilised.

Families enjoyed and danced to music from Gabemusic and cooled off with the paddleboats in operation on the lake. This activity proved to be a favourite with the amount of people lining up to have a go. There were free rides for the kids plus the Riding for Disabled Carriage ran pony rides for everyone.

The CWA versus Lions Damper Competition was also on again to celebrate the traditional Australian bread. Elaine Bright presented the Best Damper Champion title and trophy to Neil Lambert.

This year, Forbes welcomed Keith Potger AO from The Seekers, as the Ambassador. Keith is a self-taught musician and one of the founding members of the band The Seekers. With a career starting in the 1960’s, he still performs today. In 2014, along with fellow band members Judith Durham, Athol Guy and Bruce Woodley, The Seekers were appointed an Officer of the Order of Australia (AO).

Community members and The Seekers fans were treated to a short performance during the rainfall by Keith, after he had given his official speech as the Ambassador.

Before the official proceedings started, local scouts Nicholas and Charles Zannes, had the honour of raising the Australian flag.

The day’s celebration was ended with a more than impressive, fireworks display over the lake.