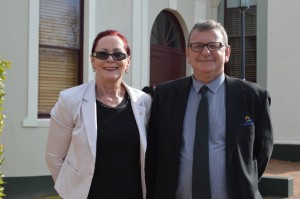 Following on from the Council Meeting on Tuesday 1st September, an extraordinary meeting was held on Monday 7th September at 8.30 am. At this meeting, the names of the two Councillors who were tied in the earlier vote were entered into a hat and Brian Steffen, GM, Forbes Council pulled a name from the hat, with Cr. Phyllis Miller’s name
being read out.

Prior to this happening, so that everybody present could be well informed, Cr. Graeme Miller, the other Councillor whose name was in the hat, queried the reasons behind the GM’s decision to go down this course of action.

His request was based on considerable discussion within the town about what was right and what was wrong with the process and to clarify the reasons behind the decisions made. Brian Steffen, General Manager and Returning Officer for the Mayoral Election said, “Following on from legal advice from Marsdens Lawyers, Corporate Solicitors
for the Council, the Local Government Association of NSW and the NSW Office of Local Government, there were three options available to the Council:

All options were advised could be open to legal challenges, and the advice from the Lawyers was that the first two options would survive a challenge whereas with the 3rd option it would be highly unlikely that a challenge would be successful.”

Brian Steffen said, “He had to ensure that the correct procedures were undertaken at all times and this is why he needed time to seek the best advice possible. The decision to draw a name out of the hat is not one made by the Returning Officer, however is a requirement of the Local Government Act 1993 and the Local Government Regulations of 2005. It states – where there are two candidates with the same number of votes, the announcement is done by a lot draw.”

Cr. Phyllis Miller said: “This has been an extremely stressful time and was one of the most difficult in her life over the past 20 years in local government.” She commented: “Let’s move forward as a team and do the job that
we have been elected to do by our constituents. We have nine Councillors working for the town of Forbes, with a range of skills and capabilities from not only our Councillors but also the staff at the Council.”

Cr. Graeme Miller, was elected Deputy Mayor, with the other two nominees withdrawing, in Graham Faulkner and Jeff Nicolson. Cr. Graeme Miller said that he looked forward to working with Phyllis and congratulated her on
her re-election as Mayor.