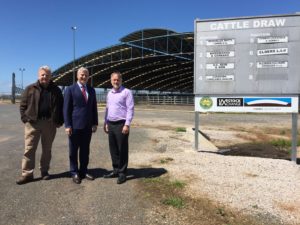 The Forbes Shire Council will receive $1.5 million for much needed upgrades to expand the Central West Livestock Exchange (CWLE) increasing througout capacity, productivity and turnaround times. “It was third time lucky,” said Forbes Mayor, Graeme Miller, and thanked the Grants Officer of the Council for his persistence in applying to the National Stronger Regions Fund (NSRF).

Graeme said numbers at the CWLE had grown over capacity and that the expansion would allow for another 600 to 800 head of cattle. “This would be a lot better for the presentation of vendors, as well as animal welfare.” The CWLE is one of three projects in the Central West to share in more than $4.2 million in Federal funding unveiled by the Small Business Minister and Riverina MP, Michael McCormack, last week. The other two projects are extensions to the Parkes Regional Airport and Wagga Wagga’s Kurrajong Waratah.

Michael said the three projects would deliver a vital economic boost to the region, as well as enhance future job and
investment opportunities throughout the Riverina and Central West. “I know the investment in Parkes and Forbes is critical in giving the region’s small businesses – a third of which are farmers – the infrastructure and services they need to continue to grow into the future,” Michael said.

Under Round 3 of the NSRF, 67 projects across the nation will receive funding. The Central West has received $17.7 million in Rounds 1, 2 and 3.